In an effort to clean up my reading list/ bookmarks page and to attain some level of productivity tonight, have some art recs! (I’m still not done going over my saved links though; I’m pretty sure I’ve saved more awesome art!)

Pyschosomatic (adj.): a condition caused or aggravated by a mental factor such as internal conflict or stress.

The direction, the poses, and the editing –all brilliant. I love how the poses convey human vulnerability to self and to the outside, and how the editing captures the certain decline or incompletion of the human person. I recommend his other works.

The Old Ones return. 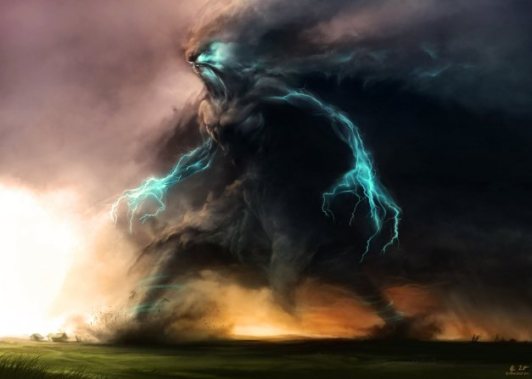 The two galleries, presumably made by the same person/groups, are filled with some of the most inspired and detailed fantasy works I’ve ever had the pleasure to see on my small screen. The quotation came from one of the reblogs, and I think it makes sense. It does, unsurprisingly, remind me of Lovecraft’s creations.

The gods are indescribably huge and all-consuming, and the way they blend with their elements is evidently a product of a creative mind. The composition of each work and the attention to details render an unbelievable, impossible feel to it; the contrast between the gods’ volatility and size, and the dwarfishness and unexceptional human structures was drawn effectively well.

There’s a signature at the bottom of the works. I just can’t make it out, and the new google image search function isn’t really helping.

Koh the face-stealer, says, The shrines are abandoned, and they use bending to destroy the earth and each other, or for frivolous entertainment.

Later, Wan Shi Tong, he who knows a thousand things, asks, what are you planning, Koh?

Merely to remind mortals that bending is not their right by entitlement, but a gift… and gifts that are misused

should be taken away.

The two characters above are the ones featured in the 10-page fan comic based on one of my favorite cartoons, Avatar: The Last Airbender. They are the anthropomorphic representations of two featured spirit beings in the series, and Sarapsys captured them perfectly! I especially love the nuances in both body language and tone; it borrows heavily from canon characterization and movement.

The beauty of this series is its social relevance. It shows or interprets different cultural traits, current events and international relations with funny dialog and even funnier characters (they’re pretty much anthropomorphic versions of the countries).
Originally found on dA.

Someone had the ingenious thought to make a wallpaper designed with frames. Targeted at children (though obviously I still want it!), the idea is to allow kids to write or draw on the wall –something that they’d want to do whether or not there is such a wallpaper– in a more orderly fashion.