I was thinking only the other day that my blog sorely lacked anything even vaguely health-related. The thought makes me want to curl up in shame as a future medical doctor and public health worker.

Introducing: this blog post, which features one of the loudest health stories to break this year. Other stories I hope to watch in the future are the sin tax reform and the rising mental health awareness.

Dengvaxia: A Study on Politics in Health

Looking at the facts of the ongoing case, it’s not hard to assume money (unethically and illegally) passed hands somewhere at the top. The controversy also made one thing astoundingly clear: our national health system is cracked and prone to fail.

By late 2016, critics from the legislative and private societies were hounding the DOH on their decision to implement a 3.5 BILLION-PESO mass immunization program with a new vaccine previously untested in the general market. By 2017, the issue had escalated to outraged panic and a widespread distrust of the government and, unfortunately, of vaccines.

The dealings were fishy. The vaccine rolled out in the mere span of months, edging out other priorities in the national health agenda. Instead of being made available to the market for private, voluntary consumption, the vaccine was administered through a program to more than 830,000 children in schools and through private officials.

A percentage of kids is now possibly at risk of more severe dengue. All of them are endangered by bad public policy and mass hysteria.

This inexhaustive timeline is adapted, paraphrased and possibly sensationalized from these key sources:

The Many Flavors of Failure

I first heard about Dengvaxia as an example offhandedly mentioned in a health-related (or was it development-related?) debate round a year or two ago. Back then, I didn’t understand the many ways the proceedings were flawed or suspicious. People were proud that the Philippines was the first Asian country to roll out the vaccine. I was like, okay, cool.

Fast forward to December 2017, and the case is hot enough that it was the focus of one of our epidemiology/policy classes under the research module. The curiosities surrounding the immunization program cross over different fields, from research ethics, good governance, public health policy, and more.

Corporate innovation often penetrates the market without any public regulation. In many cases, the government can have no pre-existing framework to deal with such novelties. This is the case of Uber worldwide, making strides while policies scramble to catch up.

What makes this case so interesting and infuriating is that the Philippines does have existing frameworks with regards to the introduction of drugs to the country’s national health program. The FEC and the PNDF exist for a reason. And yet, damningly, health executives chose to ignore the recommendation of health experts— without apt justification—- for what is probably in the service of corporate interest.

It’s easy to be fooled by press releases. Sanofi says that clinical trials have been conducted, implying proof of safety, concept and efficacy. What they don’t say is this (download source): 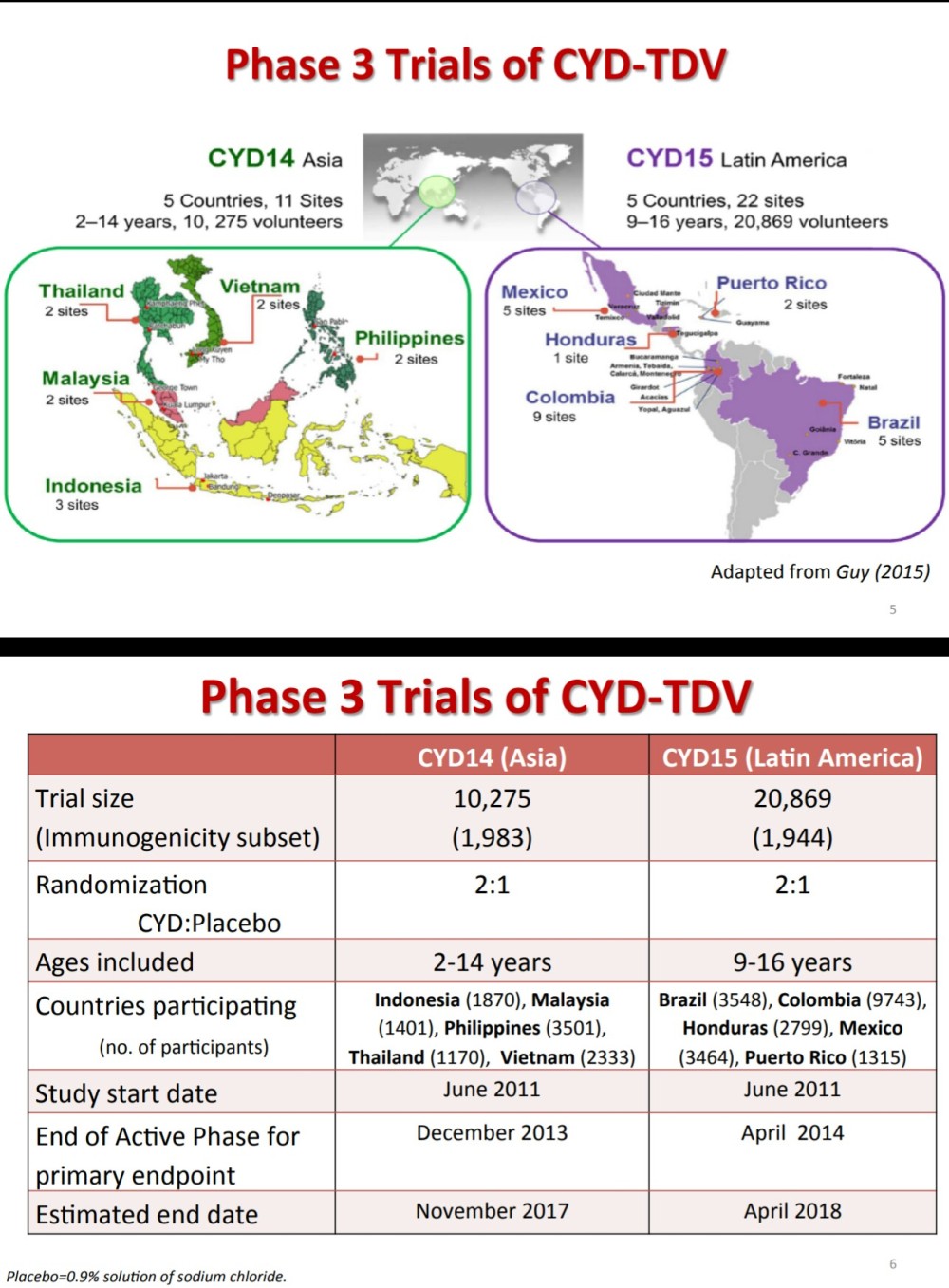 The clinical trials are still ongoing. The data they cite refer only to a primary endpoint, and not the actual end of the clinical trial. Not to mention the related lack of common sense; if the product hasn’t been tested in private markets, where did it get the support to enter public, mandatory programs?

Add their obfuscation. Up until the 2017 hearings, the operational definition of “severe dengue” used by Sanofi, DOH officials, health critics and journalists still differ. Is it the improbably tame version of 2 days fever and some bleeding? Or dengue hemorrhagic fever and shock?

As mentioned, we do have checks and balances. Within the executive, the FEC is meant to provide expert recommendations toward public policy (and now, we recommend, the council should be independent of the executive). Yearly budget negotiations are meant to concretize the vision of the government when it comes to program prioritizations. Senate and Lower House committees exist to fish out discrepancies. And finally, the Supreme Court arbitrates for the protection of rights.

So where were all of these mechanisms? They existed, but were circumvented. The DOH launched the program undermining the FEC, creating exemptions, and drawing money from a special order. The mechanisms existed, but the Congress was too late and also toothless.

The last bastion, the media, pulls through, but gains momentum and public interest too late. We are a people accustomed to reactive measures, not proactive and protective ones.

A power asymmetry must exist for these failures to happen, and it’s concentrated heavily on the hands of people who stand to profit. Is it PNoy, who wanted to add one last credential to his administration? Was it a top government official, who stood to profit in under-the-table dealings?

We need to strengthen these structures that are in place to properly inform policies. How can we help? Put pressure on our Representatives to care, drive more public interest in matters of health? We’re open to suggestions here…

As the DOH promises to monitor the health of all children who took the vaccine, I can only hope for the best. This is a DOH that must evolve from its previous incarnation, the one which:

In general, vaccination coverage in the country is rising. But non-compliant health decision-makers still persist, mainly due to a lack of awareness on its importance, failure of accessibility and even fear of the unknown.

Here, the DOH under Garin is reported to have failed in reaching its coverage goals. The percentages were way off the target (Philstar, 2014):

A paper by Castillo et al (2014) cited that majority of cases in a measles outbreak in 2010 involved non-immunized children (download source):

The failure of the Dengvaxia program to assure the safety of our citizens is one that damages the efforts of the Expanded Program on Immunization towards herd immunity.

Children, bless their souls, have died. The people’s fears are rationalized: vaccination equates serious and harmful consequences. These are lessons that may take years and millions of pesos to unlearn.

The understanding that health is a system and is part of a system is an invaluable one. In an ideal world, healthcare exists within a system where politics is powerless. In reality, health becomes the battleground of conflicting interests. Unfortunately the only certain casualties are the people.

To be fair to many of the actors in this story, catching a crisis as it happens in front of you can be impossible. Sometimes we really can do nothing but be late and retroactive. Most officials, workers and people on the ground are probably blameless, working diligently within their capabilities. This nature absolves them of malice, but not accountability.

The intersection of fields makes it clear that the burden of quality healthcare rests on all types of professionals and influencers. It comes down not only to doctors and pharmaceutical developers, but also to policy makers, economists, media influencers, local government units, behavioral scientists, and so on. We all have a role to play, and this continuing controversy teaches us to play that role with understanding and urgency in the future.