I was reading the Inquirer a week and a day ago, and I thought of airing some opinions on Philippine news. With some poetry.

The Philippines is perhaps one of the few “democratic” countries where a corrupt president –overthrown by a mass demonstration by the people –could evade persecution through the inefficiency of the bureaucracy and citation of ill-health, be reelected into public office as a congresswoman, be functional for several years and only then be called into question for one of the scandals that marred her presidency.

It would be interesting if it happens only this once. But it’s not –the current mayor of Manila is a similarly deposed president, the sons and daughters of both GMA and the tyrannical dictator Marcos live happily as “public servants”, the 90-year-old Senator Enrile is asking for hospital arrest and his cohort senator asking for bail on a supposedly non-bailable offense.

The Philippine electorate forgets quite easily the sins of its leaders. We are eager to revise history or to ignore it; why is that?

This has nothing to do with anything. Sorry.

What are the qualifications to be nominated, endorsed and awarded a Nobel Peace Prize? Does a president made of ineptitude, cowardice, colonialist mentality and economic fragility deserve it, for having been involved in the historic Bangsamoro Peace Process?

The Bangsamoro Agreement, in truth, is a triumph for mankind. It’s the only one of its kind: a peaceful resolution between the administrations of a state and a separatist movement, and has rightly been applauded as such in the global sphere. Almost all of the delegation of women who attended the End of Sexual Violence in Conflict Global Summit in London last month were integral to the Bangsamoro Peace Process. 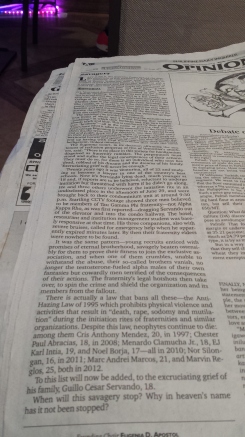 From 2000 until today, Philippine Star lists 22 high-profile or well-publicized cases of death by hazing. Three of them were clearly stated to be minors. These were cases that happened after RA No. 8049 or the Anti-Hazing Law of 1995. The law littered with loopholes is teethless; and in the absence of consistent and continuous media accountability for these frats and sororities, nothing would really change. The violent initiations will continue to exist.

Fraternity and sorority members here in the Philippines would like to defend themselves and their organizations from the darkness cast by Servando’s recent death (and following crackdown on hazing frats). It’s either a defense by exclusion (our frat/soro doesn’t initiate members by hazing!) or by justification (it’s an accepted tradition!). They would go on to extol the virtues of being a member of a fraternity or sorority, how much it aids in quality of life in college and beyond, et cetera. The presence of high-profile frat and soro members in law enforcement, public office and media does not hurt their arguments either.

But maybe their arguments are valid. Maybe some frats really don’t haze neophytes, or humiliate them. Maybe some sororities really do provide an unimaginable security net.

What their arguments can’t ignore is the persisting culture of violence, and the fact that it only persists because of the people willing to excuse it –when there’s no spotlight forcing them into law-abiding behavior.

The article would have us believe that China has no historical evidence to back-up their claims. This may very well be true.

It’s probably the same for their conflicts with Malaysia, Vietnam and Japan. …Go China! I support your territorial aggression (not).

The thing about the RH law (RA No. 10354) is that everyone is misinterpreting it left, right and center: appealing to lawmakers and judges to repeal it or to reinstate it, distrusting the opinion of statesmen in favor of the opinion of preachers and fear-mongers.

The end goal of the RH law is to uplift the conditions of the impoverished and marginalized, to promote safe sex, healthy lifestyles and family planning. It compels the state to provide free condoms and contraceptive pills (though bishops are urging Catholic medics to not issue birth control!), and finally mandates the inclusion of sex education in the school curriculum.

Some provisions were struck down from the law. I beg to oppose.

Sometimes I want these protestors, justices and men to sleep and live the life of a teenage girl for a day, a mother of 7 for another, a working single mother of 2 for another, and a sexual assault victim for the last. Then let’s see how they’ll take to imposing their agency on another.

There’s a valid argument based on the fact that we are an archipelago of hundreds of dialects. In truth, learning Filipino may not really be as necessary as learning English in our increasingly global and competitive world… but really? This is a strike against nationalism and a disservice to the cultural values and traditions that are handed out through literature.

I support courses in the native tongue –whatever that dialect is– for as long as possible and appropriate. The Filipino language is beautiful and evocative.  It was also only in college that I was mentally and linguistically mature enough to appreciate poetry and novels in Tagalog.

People will be missing out.

Life Update Only a couple of weeks left before school starts! Sigh I will miss this bumlife. Though there will be some interesting things happening mid-July as I’ll: