I may be a bit confused by the subject of this post.

The whole of August is dedicated to honoring and celebrating our language, culture and history as a Filipino people. But to be honest, it’s becoming harder and harder to feel like there even is a Filipino people to celebrate.

Finding common ground with people across social and political divides has become an uphill battle. The corruption and injustices that have characterized the Philippines since time immemorial have only escalated.

Yet there are places where happiness and nationhood can be found. It’s in the moments of solidarity in the face of calamity, in the shared humour across television networks and social media, it’s in generations of people who still believe in love *cue instrumental music*. 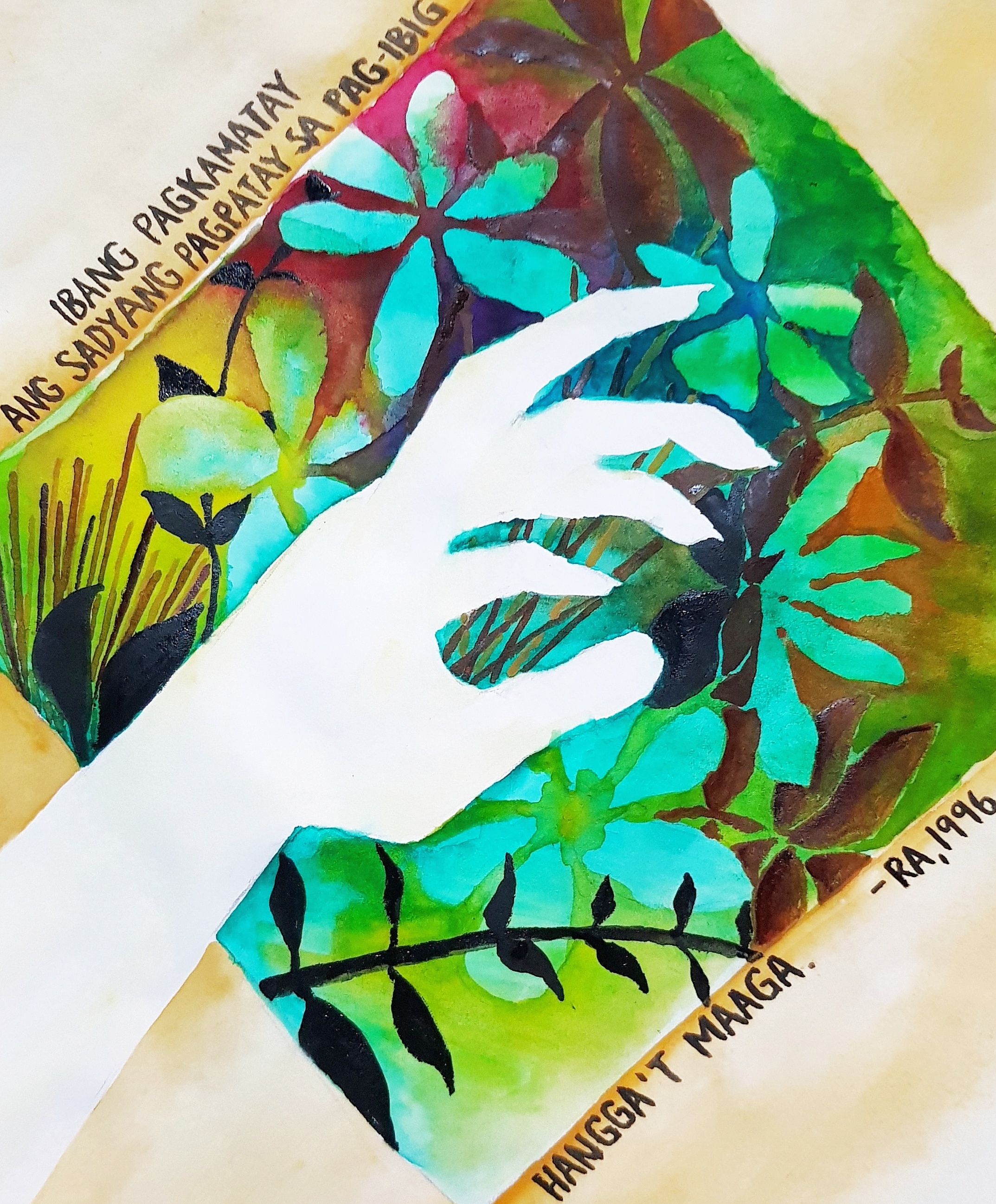 While this piece isn’t politically or socially profound, it might still resonate with individuals irrespective of class, age, gender or party. This is Hangga’t Maaga by Rebecca T. Añonuevo. It was published in 1996 in a collection entitled “Bago ang Babae“. It reads:

The recollection of love lost is painful,
but the mere existence of love can be an infinite joy.
As someone who hesitates in the face of commitment,
this poem is a reminder that even in the things we lose,
we gain.

The painting process I went through just minutes earlier is strangely intertwined with medicine (I guess. If I try. Please.)

I was doodling in pharmacology class when I came up with the idea of doing something for Buwan ng Wika. I’ve been meaning to do something related to art ever since I read this interesting article defending why the arts and humanities should be taught in medical school.

I decided on a negative space approach because I remember this was what I did when I featured Huseng Batute’s Itanong Mo Sa Bituin (Ask the Stars) two years ago. As to the concept– well.

I’m not really good at watercolor, or more accurately I’m not that comfortable with it. I prefer the opacity of acrylic and the ability to just paint over your mistakes. Watercolor is a bit more whimsical, and it requires more intuition when it comes to timing and layering design. But it’s what I had in the condo, so… 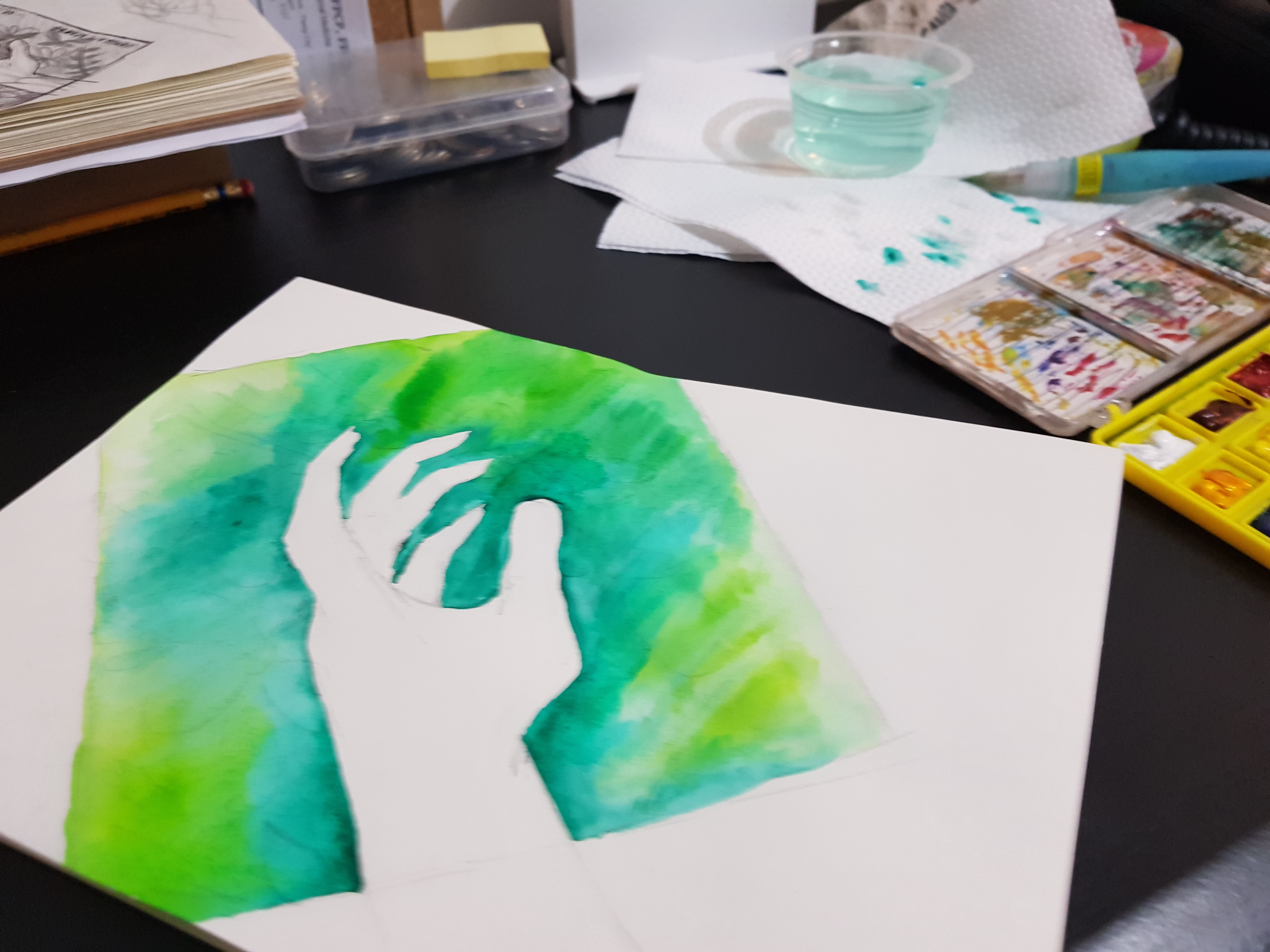 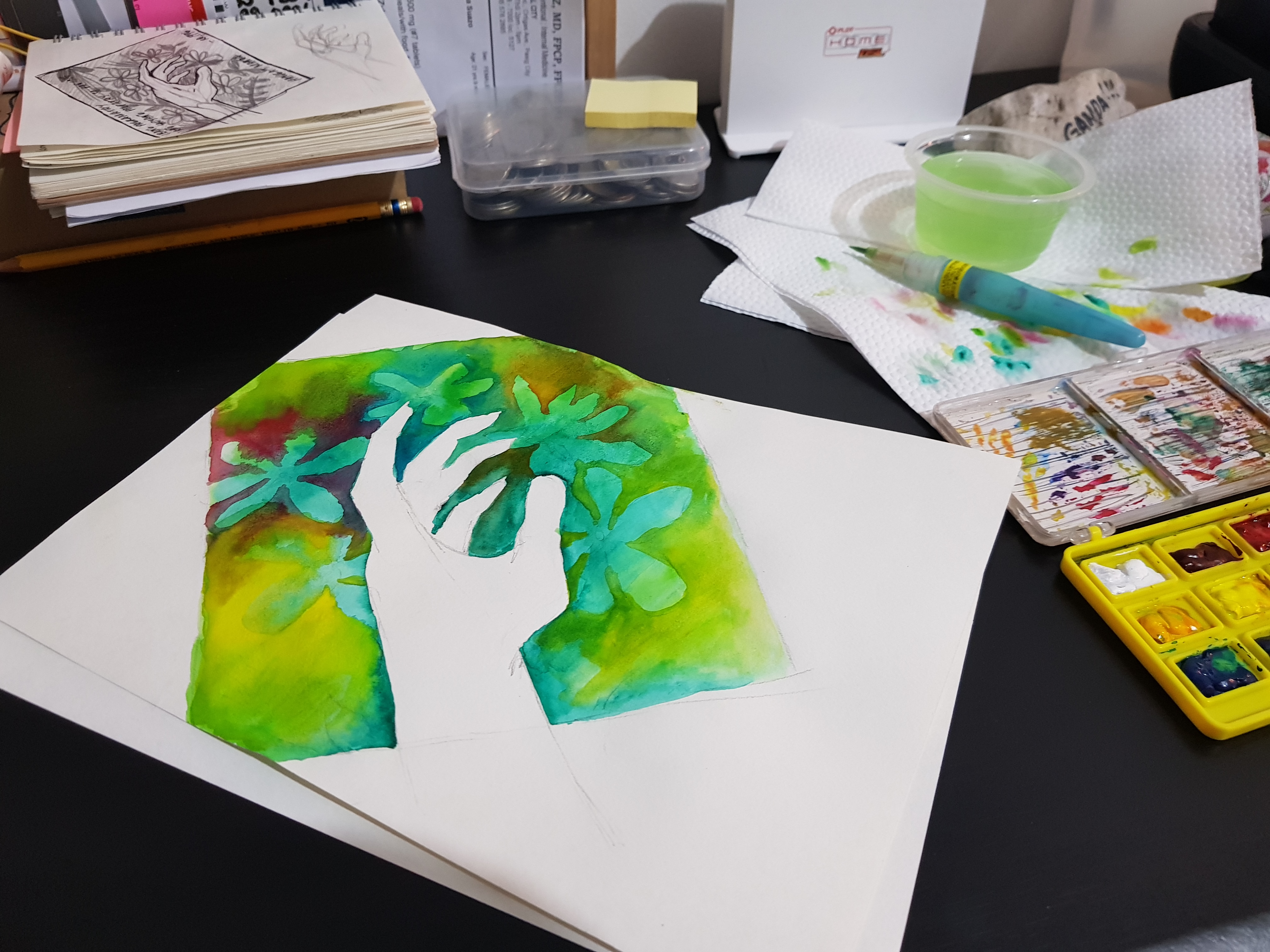 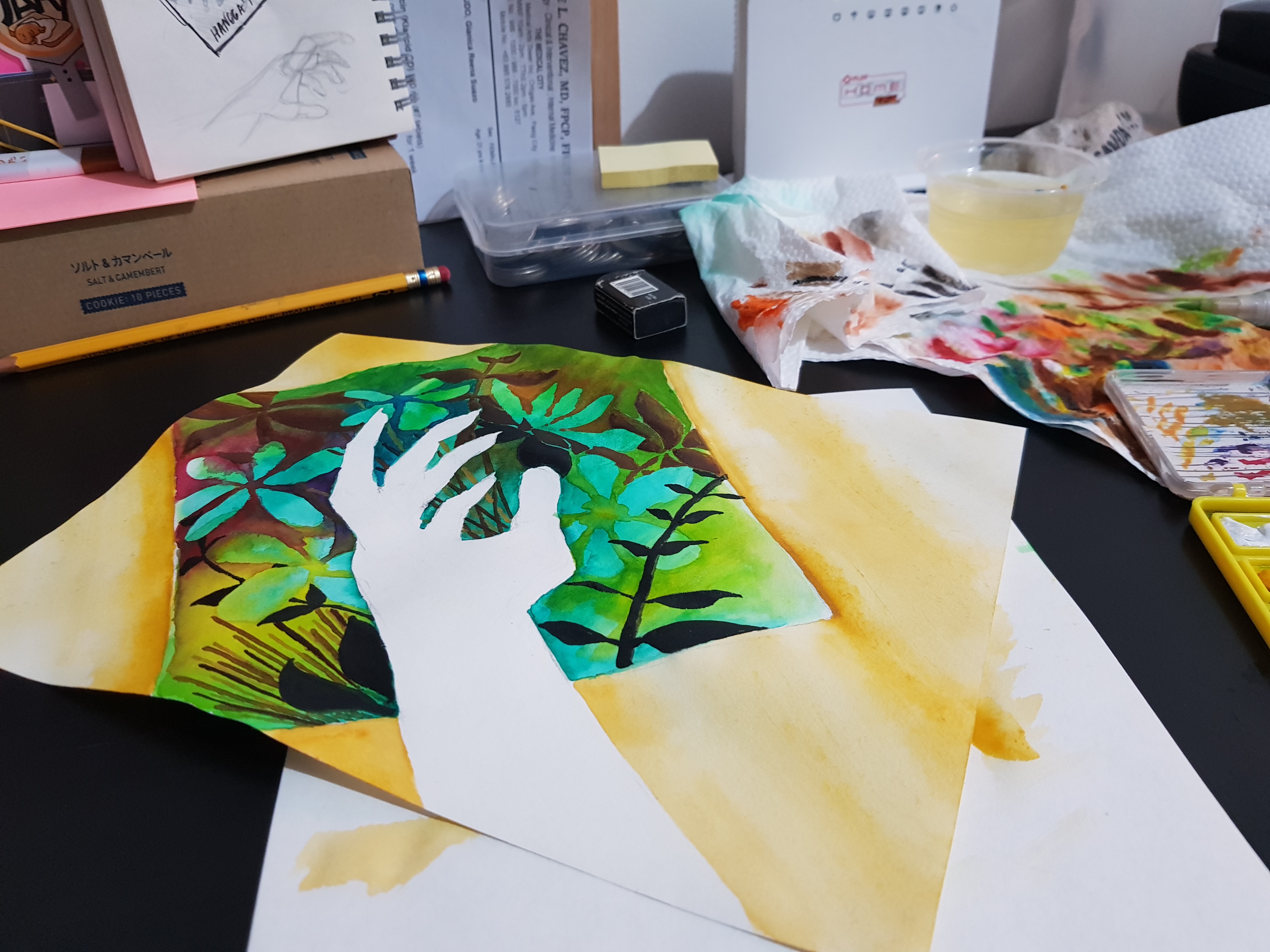 I used regular notebook paper (maybe 80 gsm) since I didn’t have watercolor paper lying around the condo. Cries. I also had to make do with my small round-tip travel brush, which is a struggle when you’re trying to wash the paper. Lol.

Where was I? Ah, yes. As I was painting earlier, I kept an internal chant of “my hands should stop shaking“, “stay within the lines“, and also “stop bleeding!!!”. I had to stop and laugh at myself. Those were pretty much the same words I was thinking as I performed my first ever blood extraction (phlebotomy). Another clinical competence unlocked! 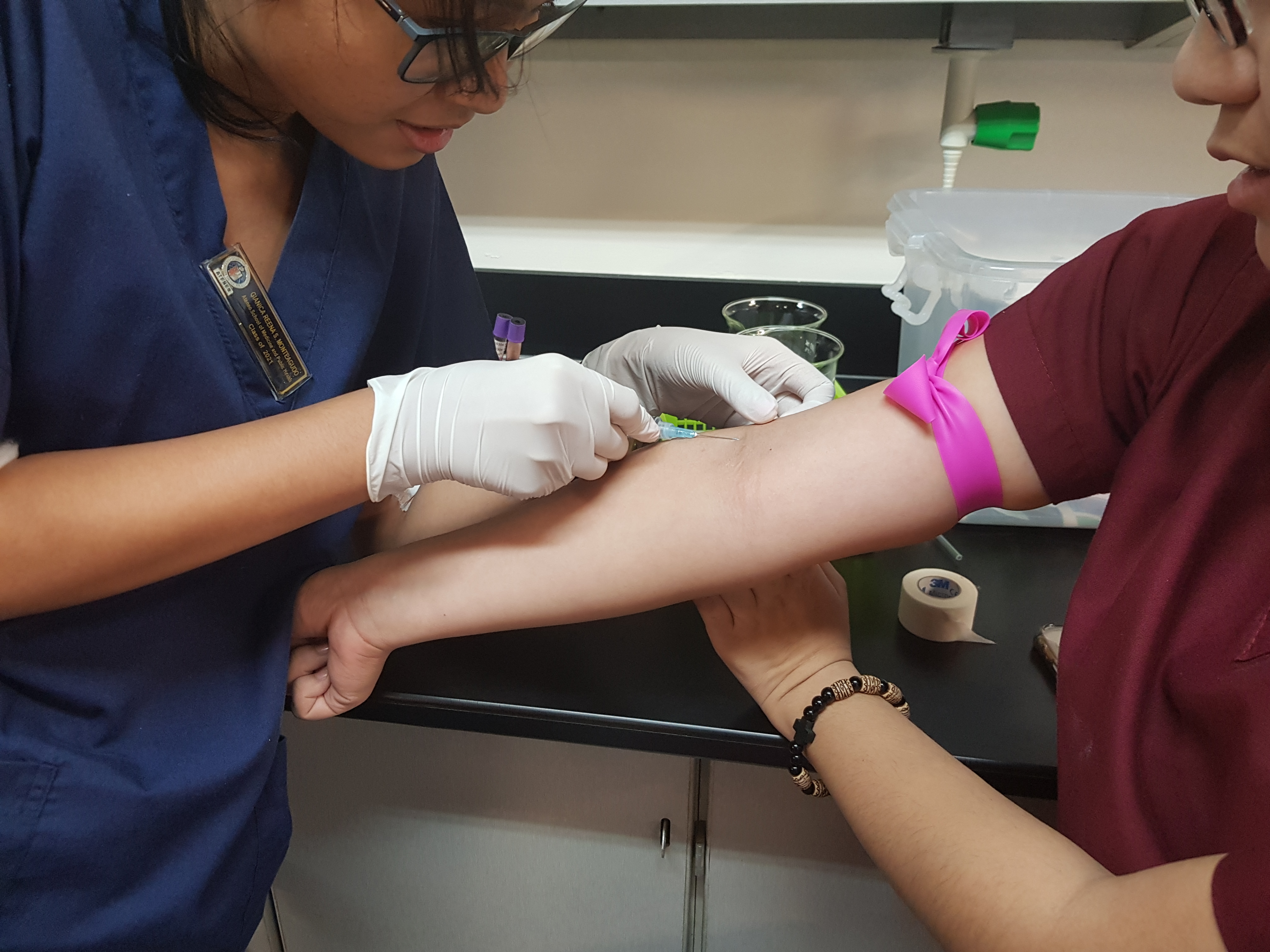 Exciting isn’t it? I’ve been subjected to blood extraction many times, so I didn’t think it was going to be that complicated. Still, at first I had no idea what to do. Thankfully, we had an experienced Med Tech in our group (thank you Mark!!!) and our physician supervisor was very attentive.

Thank you to my partner Nicole for bearing with me. It took two tries (my first try literally did not go anywhere except right at the skin layer; good thing it wasn’t painful or bloody). But I got there in the end.