“How it feels when white people shame your culture’s food — then make it trendy” by Ruth Tam on the Washington Post | My family’s food went from ‘Chinese grossness’ to America’s ‘hottest food trend.’

The best meals are more than the sum of their ingredients; their flavors tell the stories of the rich cultures that created them. When the same respect is afforded to immigrant food as traditional “American” food, eating it will sate us in more ways than one.

The unique trials of being distinctly Asian in the western world is one of my very few qualms about pursuing a transnational career and lifestyle in the future.

The ongoing refugee crises in North Africa and across Europe, and in Asia Pacific, are relevant demonstrations of persistent xenophobia against people who are not white. The immigration issue that is the topic of heated debates in election-frenzied USA recalls mentions of post-9/11 racism, ‘unjust’ displacement of labor, and ‘distasteful’ citizenship grants.

As a Filipino, I’ve heard stories.

Most probably, any Filipino working abroad must strive to remove traces of the ‘exotic’ for any sort of professional advancement and recognition of authority. I must play into a culture that represents values that differ from the ones I grew up with. This concession is fair to a certain extend, because I did enter a foreign space with foreign values. The majority dictates social norms. But where do we draw the line between adaptation for ‘cultural harmony’ versus adaptation for a ‘cultural hegemony’?

As a nationalist, this is problematic. In the safety of my home and my country, I am adamant in saying that ‘I am proud to be a Filipino’. I have the strength and the confidence to say that wherever I go, I will proudly declare the same. And even in the context of global citizenry, my expression of my identity as a Filipino and as an Asian is theoretically necessary for the creation of diversified discourse. When people of underrepresented nationalities go abroad, the perspectives they add to any conversation should enrich both intersecting cultures.

Obviously, that’s not the case. There is a pressure to survive and a pressure to adapt that makes it less likely for anyone to be overtly different. While there are exceptions to the case, and even though we millennials like to parrot uniqueness and individuality, some identities are still more palatable than others. And that identity happens to be dressed up in privilege.

It seems like pnly the privileged majority has the full right to the values of uniqueness and individuality. As someone belonging to the ‘other’, my ability to be unique is diluted by my need to belong. Otherwise, I cannot enter a cohesive space for work and productivity. I will be too foreign.

There are generalizations to contend with. I have to either actively distance myself from the stereotype which equates any Southeast Asian to a domestic helper (which is not inherently a bad profession, but that requires another discussion), or to actively play into subservience because that’s easier to understand and digest. At some point in time, I may have to defend that the Philippines, Thailand, Malaysia, Cambodia and Indonesia are in fact all different countries, though the people may look similar. I belong only the first of them.

I’ll be constantly thanking my bilingual roots for giving me the dialectical dynamism needed to quickly adopt accents. I was born here, I’ll imply with every twang and every unpronounced ‘r’. I’ll have to excuse my hard-to-pronounce name, which, if I were any whiter and my nose any higher-bridged, would have been accepted.

With a name like mine, I could have been a Spanish expat, not a Filipino migrant.

I’ll have to accept that behind my back some people will still call me a ‘brown monkey’ despite my achievements, or will wonder condescendingly at the food I try to cook or the mannerisms I try to suppress.

How quaint, they might say, as I tell stories of my life in the Philippines –as if by virtue of being born somewhere ‘other’, I was more or less inherently disadvantaged and therefore inherently less.

Also a photo of me, a Filipina, with the Global Health Debates (x) logo. We hosted and competed in this international tournament. I’ll post about it someday. 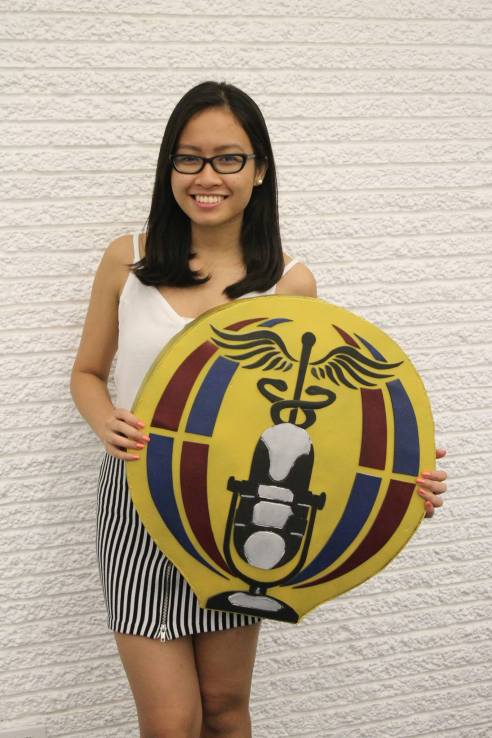