The night before the self-styled Fight of the Century (the Pacquaio-Mayweather boxing event), I watched some of the best scenes from two of my favorite action films of all time, Ip Man and Ip Man 2. In this scene in the sequel, the humble protagonist goes against the odds and fights the arrogant and almost completely unlikable Twister. It’s a match between Chinese martial arts and Western boxing, or a match between China and the West, or a match between an honorable man and the opposite.

But the point isn’t in the video clip (though you should still watch that) –it’s in the comments. Specifically this one: 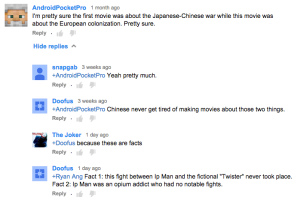 The Japanese are fond of historical drama and of patronizing manga reflective of Shinto customs, and they feature such things concurrent with their J-Pop, Alt Culture, and westernized material. Korean teleseryes or serial dramas which are shown here in the Philippines are part-modern, part-fantasy and part-historical. It’s a weird mix of genres that works, but more importantly, they include themes unique to their nation.

In the Philippines, that’s not the case. Our movies and tv series do reflect to a certain extent our history and culture –naturally, any scene grounded in the Filipino reality will give insight to the life of a Filipino– but the idea of historical drama as a successful and marketable genre never really took flight.

Movies about Rizal, about western colonization, about revolutions and our ancestors and our nationality, are few and far between. They are most often produced and enjoyed for the purpose of high school discussions, or to fill up that one allocated spot during the Metro Manila Film Festival. It’s frustrating, because these are values and events that have formed our identity as a nation, and our decision to devalue the contributions of our past (contributions by colonizers or not) also devalues our ability to criticize the past and shape the present.

Exclusively, we have set our path to follow well-known comedic or fantastical formulas, or to emulate the west in search of the controversial. Who’s agenda was this? It’s not helping the Filipino masses. For most of us, knowledge and appreciation of Philippine history begins and ends in school.

Our history is rich with flavor. But at this rate, who would learn to love and entertain it?

Life Update I should be studying for 133.