The phrase cultural appropriation is gaining weight in the criticism of popular media, a provocation brought about by hipster smokers dancing to music festivals while wearing First People attire, by the music videos of the likes of Miley Cyrus, Katy Perry and Taylor Swift ostensibly mocking the ways of African Americans and ghetto communities. And now –which is the impetus for this post, honestly– One Direction has joined the ranks of artists who may or may not have appropriated cultural traditions (specifically martial Japanese and tribal African) in offensive or well-meant design in their latest music video[1][2].

But, as the title of this post suggests, “cultural appropriation” may not be as simple and clear-cut as online activists assume it to be, and, quite probably, it’s not an accusation that can be made in innocence without certain considerations.

tl;dr I’ll just bring up a lot of questions in this post, a lot of which I probably won’t even answer.

The phrase “cultural appropriation” attacks the deliberate reworking of images and styles established as culturally significant in non-dominant identities (e.g. African American, East Asian… basically any culture that is not Western) into props for entertainment, tools for exotification or as a contrast to the ‘more sophisticated’ trade by Westerners[3]. In general, it either makes caricatures of a tradition –strips it into stereotypes, removed from any historical or cultural nuance[4]– or devalues it in comparison to Western tradition.

In specific cases, it becomes particularly harmful when socially dominant sectors accessorize with cultural attire that is otherwise a cause of discrimination.

While First Peoples (and other tribes usually categorized into the term ‘Native Indian’ or ‘Native American’) are struggling against the unfair legal system which historically kicked them out of their ancestral lands, are battling societal pressures coercing them to ‘modernize’ and ‘fit in’, music enthusiasts –for some indecipherable reason– have decided to appropriate the headgears and the warpaints as accessories in a blatant show of privilege.

The fact that some people can don these costumes without fear of stigma, free of a continuing history of discrimination –while it is quite the opposite reality for the people actually associated with those costumes– is a problem.

There’s no denying the fact that all of these intents and their subsequent effects are harmful. But the line of judgment blurs very often: at what point do you call a costume a detriment to that culture? Are all Hollywood adaptations bound to be racist plays at art?

(Probably yes to the second question, though don’t quote me on that).

But I have this question. If the effect cannot be easily quantified –if the reactions are a spectrum, with people offended and people indifferent– is it still invalid to “use” the culture of other people, proven the intent is not to offend?

(Though to be honest, I do not think anyone really goes out of their way to think, “how else can I prove how much of a douchebag I am? Oh yes, I will appropriate black culture by adopting a ‘blaccent’ in public.” But it may be ingrained. I digress.)

Because I find myself thinking of another (less confusing) parallel, one which irks me just as much.

It’s the you-have-to-have-read-the-first-400-issues-of-Batman-to-consider-yourself-a-“TRUE FAN” issue. Or more or less it is also tell-me-the-history-of-the-whole-Middle-Earth-before-you-can-wear-that-elf-costume. In the context of fiction, gaming and other subcultures, comprehensive understanding and historical association seem to be prerequisites of appreciation –a stance which I am definitely against, because I’m of the opinion that wearing the Batman symbol (a nice contrast of black on yellow on black on yellow etc) or a Ramones shirt or carrying a Star Wars lightsaber is an act of enjoyment and appreciation of the work, regardless of whether or not there is a wikipedia-dense trivia knowledge to back it up.

Do I have to hear the whole band’s discography before I could wear a band shirt? Should I return my Italy football jacket because I honestly don’t follow the sport anyway? People take so much offence when I fail to live up to the measure… Has belonging to the culture become a prerequisite for partaking in the traditions of that culture?

If the answer to this question is… definitely yes, you have to be part of the culture in order to take up the costume, then at the end of the day this is the only appropriate (hah) form of appreciation:

And I’m not sure if I am quite happy about this (restrictive) conclusion.

(Though upon proofreading I realize that gaming culture =/= real life culture, i.e. it’s not really damaging to your identity if someone disrespects your preferred game or show or book, or wears it as an accessory).

And so (a slight detour):

When I was in Spain for a stint way back in 2011, my friends and I had the opportunity to teach people from all over the world tinikling, this skill-heavy dance which, at some point or another, was the national dance of the Philippines.

In all honesty, if a foreign man (specifically an American man, since the USA has been our persistent neocolonialists since independence) wore a barong or any other national costume randomly, I would feel uncomfortable. I would say: why the hell are you wearing that. It’s not yours. Suit up your own way. But for some reason I would feel differently if it were any other tradition –if a foreigner tried cooking adobo, or if they tried dancing tinikling or playing sipa. In fact, I would be damn proud of my heritage. I would be (and am and was) happy that my culture permeates the fabric of the world.

The point is this: it’s not necessarily offensive for others to emulate the traditions of an historically oppressed or undermined culture. It can even be a good thing, because it means that ‘appropriated’ culture is getting the relevance it deserves in today’s age. It’s all a matter of how the representation comes to be.

But it’s easy to say that judgment is intuitive, that as an average reasonable person I can determine if a form of representation is already crossing the line into culturally offensive, even if I am an outsider with no frame of reference or connection to that minority culture. It’s easy to take the moral high ground and act as a defence for the involved.

The passing of judgment on different people for being offensive, for “culturally appropriating” non-dominant traditions, for calling them out on their mistakes, is in itself problematic when you don’t belong to the minority or foreign group in question. The act of saying that “this is offensive” when you are, in fact, not the potentially offended party to begin with, is an act of imposing your own moral values on another’s. It’s basically what the West has been doing for the last hundreds of years, and it’s not necessarily a good thing –not when speaking for the voices of minorities means undermining their capacity to think and lead action by themselves. 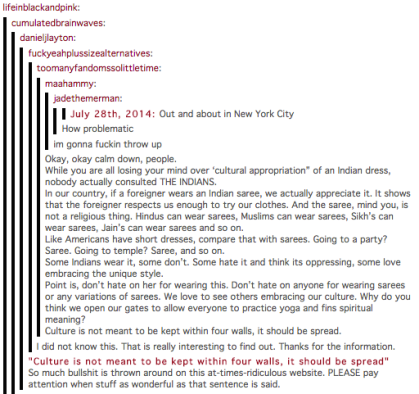 To summarize: several commented that Lady Gaga was culturally appropriating the sari. Another said that it was a form of cultural appreciation, a symptom of an expansion that is much encouraged. The next replied with a discourse on the nuance of racism.

Of course, I may have just confused myself more with this discussion. Culture is meant to be shared, yes. Culture is not meant to be used to further embolden racist mentality, yes. …what was my point?

Oh, right. Both and all of these were valid (in my opinion) given the fact that they were raised by people who were directly associated to the culture in contention.

I have never considered ethnocentrism as a particularly constructive tool in global discussions, and I’m not about to start now.

I think, if I were to sum up this article in ten words or less, I would say:

Discrimination sucks. We should try to understand before we speak.

Which is as good disclaimer as any, I say.

[1] And because I remain a fan, go watch Steal My Girl.

[2] Did I actually resolve whether or not 1D appropriated African and Japanese culture in their latest MV? No. Of course not. Weren’t you reading?

[3] This is the definition used in this article. However, cultural appropriation can technically happen even when it’s non-politically dominant identities appropriating the culture of others (e.g. Caricatures of Americans as dumb jocks or valley girls, of Scottish men wearing kilts) but (a) it isn’t as harmful to the extent of homogenizing that culture and relegating its value, causing discrimination because (b) it isn’t rooted in and reinforced by existing power imbalances such as in institutionalized racism. So while carelessly and facetiously borrowing traditions and costumes of any race, ethnicity, identity without respect or understanding via is bad, it’s not always “cultural appropriation”.

[4] Something along the lines of “art without meaning” as a persisting trend.

I should stop taking to the pen after midnight. I end up sleeping at 4AM.

+ I’m queuing this up for Wednesday! Finally. A long post. I haven’t started anything for TBL in a while.